"And do not forget to DO GOOD
and to SHARE with others,
for with such sacrifices GOD is pleased."
Hebrews 13:16
New International Version

FYM Foundation Aid Recipients from Briarwood Elementary School
In May 2013, two EF5 Tornadoes struck and devastated Moore and El Reno, Oklahoma, USA. Upon hearing this unfortunate news, The FYM Foundation, being the charitable arm of the Iglesia Ni Cristo (Church of Christ), was instructed by the current Executive Minister of the Church, Brother Eduardo V. Manalo, to provide immediate relief to the victims of the said tornadoes. On the 22nd of June 2013, at West Moore High School, the FYM Foundation donated at least two thousand (2,000) relief bags to the victims still residing in the area; as well as donated a total of three hundred seventy-five (375) “Apple iPad 2’s” which were distributed evenly to the following schools: Briarwood Elementary School, Plaza Towers School, and Highland East Junior High School. In addition, sixty thousand dollars ($60,000.00) was donated to the Office of The Governor, Oklahoma, and another one hundred fifty thousand dollars ($150,000.00) to the City of Moore, in order to aid in the city’s recovery. 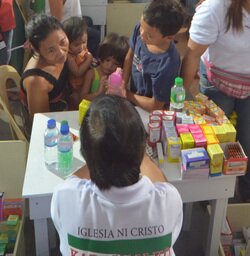 On April 13, 2013, a day after the 50th year of passing of Bro. Felix Y. Manalo, his legacy lived on and inspired the present Church Administration and the Church members to uphold the doctrine of sharing and giving to those who are poverty-stricken and in need. Kabayon Ko, Kapatid Ko (My Countrymen, My Brethren), a welfare project spearheaded by the Executive  Minister Bro. Eduardo V. Manalo, was conducted in Pasay City, Philippines where an estimated 300,000 people, members and non-members alike, flocked and received free medical and dental assistance as well as bags filled with various relief items. 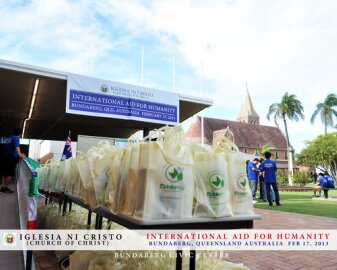 On the 17th of February 2013 the Felix Y. Manalo Foundation, Inc. provided immediate relief to the victims of Cyclone Oswald in Bundaberg, Queensland, Australia. The FYM Foundation donated twenty thousand dollars ($20,000.00) to Bundaberg East State School, North Bundaberg State School, and the Office of The Mayor For The Victims of Cyclone Oswald, respectively. Members of the Iglesia ni Cristo (Church of Christ) from the nearby areas volunteered and joined the FYM Foundation in helping the neighborhood in cleaning the flood-stricken houses and streets while bags filled with relief items were freely handed out to the victims. 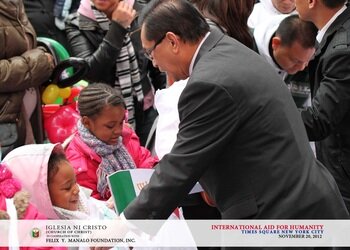 In response to Hurricane Sandy, the Felix Y. Manalo Foundation, Inc. conducted an ”International Aid For Humanity” program on the 20th of November 2012 in Times Square, New York, USA. There, the foundation was able to provide “relief bags” to the victims of the disaster, as well as donate twenty-five thousand dollars ($25,000.00) each to Coney Island and Bellevue Hospital. In addition, the New York Fire Deparment (FDNY Foundation, Inc.) and New York Police Department (NYPD Foundation, Inc.) each received a generous fifty thousand dollars ($50,000.00) from the FYM Foundation.